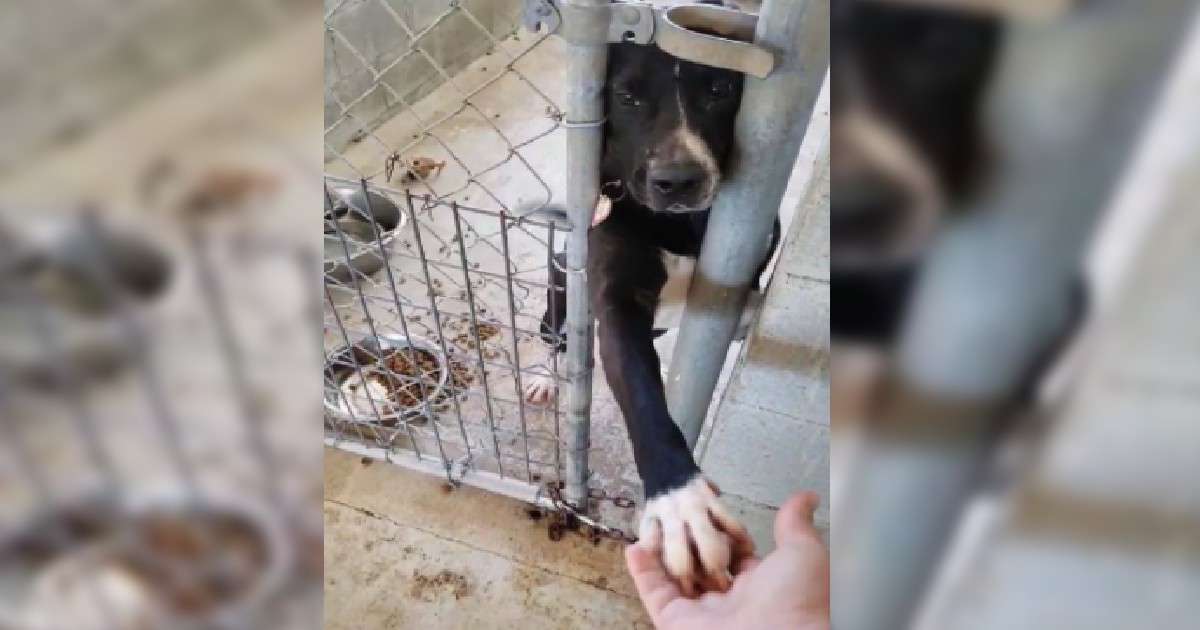 I bet there are days you wish to spend surrounded by people, smiling and sharing positivity, but there are also times when you just wish you stayed at home all day long, being able to stand only your own company.

However, one cute dog seems to never be in a bad mood!

For a year and a half, since autumn 2018, every visitor at the Bullock County Humane Society had the opportunity to hold hands with an incredibly kind and loving pup- Speck!

The moment someone approached him, Speck pushed the face between the metal bars and reached out the paw.

“All he wants is people’s love. He will reach his little hand – out and he just wants you to touch him and hold his hand. And he’s so sad when you walk off to finish cleaning or whatever you have to do.”

Life was not easy for Speck before he eventually ended up in the Alabama shelter. Yet, all his scars still visible on his face, and all that time he spent unnoticed at the shelter, did not change him.

“You could put anything else around him — another giant dog, a cat, but he is just so fixated on getting love from people that he doesn’t care about anything else.

He just wants you to touch him. If you sit down, he’s laying on you, if you hold his hand, he’ll hold your hand, if you scratch his belly, he’ll rollover.

Speck is what you would expect of a puppy, however, he wants to be best friends with his human.

He had my heart on day one of interacting with him. My family honestly could not understand how or why such an amazing dog had been forgotten and overlooked in the shelter. The moment he reached his paw out to me, then my husband, and my daughters I knew I needed to show the world this beautiful boy.”

Therefore, one day, she decided to film his sweet hand-holding routine and posted the video on Facebook.

The clip went viral in a few days, with numerous people asking to adopt Speck!

She eventually found a perfect home for the affectionate dog-“in upstate New York with his new human dad Mike on a 26-acre farm.”

After watching the video, a rescue group called Allie’s Hope For Paws Dog Rescue, located in Union Springs, AL, that helps out pets just like Speck, offered to transport him to his new home.

Wilder hopes that Speck will inspire people to open their hearts and rescue other homeless dogs, and added:

“We are so excited. Not only did Speck get adopted due to this video of his cuteness but he also helped a few other fur babies get rescued and he got us some food donations!”

We are all happy that this kind-hearted puppy found a permanent home and will get all the love and care he deserves!