A woman recently went to the hospital in agony, complaining about excruciating pain radiating from her stomach. Doctors immediately ordered an x-ray on the woman, but nothing would prepare them for the shock they’d experience when they learned what was actually inside her.

Sandra Milena Almeida was recently devastated after learning that her Columbian husband had been cheating on her. Wanting to get back at the man, she devised what she thought was the perfect plan, but things didn’t exactly turn out the way she had hoped.

Just one day after putting her plot in motion, Sandra was being rushed to the hospital for crippling pain, leaving doctors no other choice than to get to the bottom of things. Knowing they had to see what was causing her problem, they ordered an x-ray and were shocked to see dozens of indistinguishable, 3cm-long (just over an inch) items in her abdomen.

At first, doctors thought that the woman was a drug mule, but that didn’t turn out to be the case. According to Mail Online, doctors immediately rushed the woman into emergency surgery and removed a whopping $7,000 that she had ingested the day before. 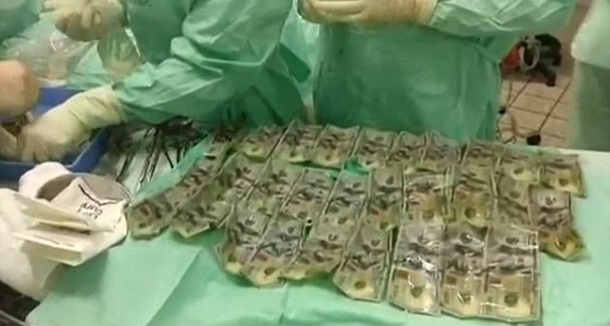 In all, the surgical staff pulled out seventy $100 bills that Sandra had swallowed to get back at her lying, cheating husband the Daily Mail reports. The scorned wife initially hid the money “in a fit of rage” after learning of her spouse’s infidelities.

However, she later decided that she was going to leave him and wanted to do so after hurting him the most. In order to do that, she rolled up a few bills at a time and began to swallow the cash, which was supposed to be used for vacation, until it was entirely gone.

Unfortunately for her, the money would create severe problems inside her body, leaving Sandra in agonizing pain just one day after her meal of money. Although they found $7,000 in total inside the scorned woman, doctors were only able to save $5,700 of it after removing, cleaning, and drying the cash.

“We took the patient into surgery for two procedures to clear the blockage on her stomach and intestine,” said Juan Pablo Serrano, chief surgeon at the hospital. “The dollar notes were washed and are in good condition, but the rest of the money was lost because of the gastric fluids.”

People can do some pretty crazy things when they find out that they’ve been betrayed, but this lady may just take the cake. After all, it doesn’t get any worse than unnecessarily injuring yourself because you think you’ve hatched a brilliant plan to get back at the person who hurt you.