I feel that if a person loves animals, they usually have kindness within them. Unfortunately, I am wrong. Not all dog owners are kind people. When you hear the story about what these heartless pet owners in Russia did to their poor German Shepherd mix, you’re going to be very angry. But I want you to know that as a consolation, there is a happy ending to this story – although maybe not justice.

Because the dog’s owners no longer wanted to deal with him, they gave him a “lethal injection.” Thinking they ended his life, they buried him in a shallow grave out in the Russian forest. Against the odds, the dog survived the attempt on his life. He also survived being buried alive. And somehow, he dug himself out of his grave in the remote Russian forest and pulled himself to the roadside for assistance. 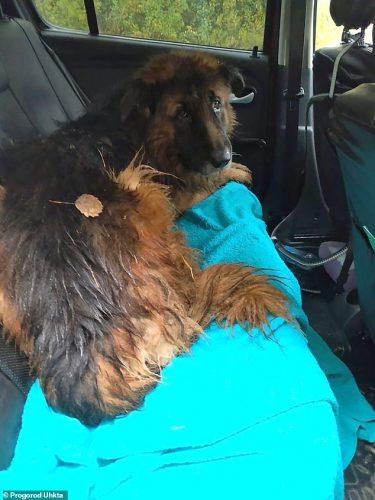 Olga Lystseva, 39, a woman with a generous heart, saw the seven-year-old German Shepherd mix along the side of the road. She slammed on the brakes and pulled over. When she got closer to the canine, she could tell the pooch was in a state of pure desperation. He was wet, alone, and exhausted. She later said that the sight of the dog haunted her – as though he had risen from a grave.

She offered the desperate animal some food and water. He devoured it all and then collapsed into the back of her car. He slept the entire drive across northern Russia to Lysteva’s destination in Ukhta – a distance of 93 miles. 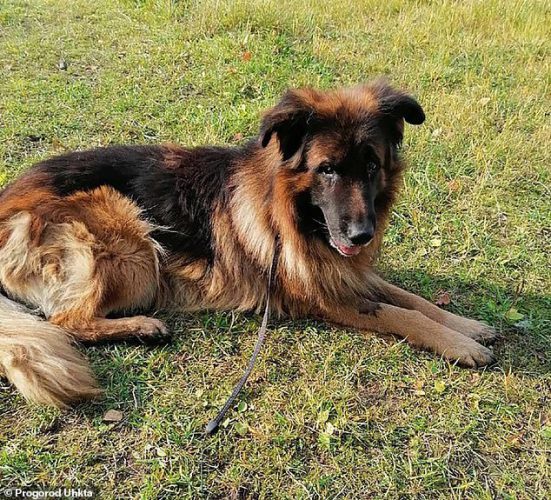 In the city, she brought the dog to the dog rescue service known as Kind City. Immediately, the group got to work. They posted messages about the dog and soon learned that he had come from Yemva. Then the unthinkable happened – Kind City came into contact with the dog’s cruel owners.

They were shocked he was still alive. The owners told Kind City they had “put down” the dog because they thought he was “unhealthy.” They confessed to injecting him with lethal drugs and then buried him in a forested area along the Ukhta-Syktyvkar highway.

Kind City verified the truth of their confession. The dog’s paw was shaved where the injection was made. The cruel owners then “apologized” for the “mistake” of burying their dog alive. No action was taken against the Russian dog owners.

As part of their process, Kind City brought the abused dog to a vet. The doctor found that the canine suffered from no serious problems. Besides being hungry, the dog was otherwise healthy.

Ekaterina Nimak, from the rescue organization, said: “Thanks to Olga, Kiryusha has begun a new life. In the shelter, he is very calm. He walks on a leash, does not rush anywhere, rarely conflicts with other dogs, and does not bark. He is good-natured with people.”

Since this information was shared, another report came out indicating that the dog is now living with a foster family. Hopefully, he finds a forever home that treats him how he should be treated.