We all have those shower and house-chore moments when we sing so deeply in our feelings that we start feeling like Beyoncé in Black is King.

Well, this Singing Parrot wasn’t joking around and he does a better Beyoncé impression than most of us. Little Chico is a cute nine-year-old yellow-crowned Amazon parrot that lives in Lincolnshire Wildlife Park in Friskney, England. [1] He recently went viral on Facebook after he was filmed singing “If I Were a Boy” by Beyoncé in an almost human voice. He sounded so amazing, unlike most parrots that would vocalize and sound like crackling radios. Little Chico might be the next big thing in the music industry because this guy is hitting notes higher than some pop stars out there.

With his sassy attitude and incredible voice, Chico has become the star of the park and attracts visitors from all over England. He’s a social bird and loves to entertain people. He enjoys the attention and could literally sing all day long.

The Lincolnshire Wildlife Park CEO, Steve Nichols, joked, “Who’d have ever thought that a parrot would cause social distancing problems due to being so popular?”

A Beyoncé impersonator with wings

Chico is like the Sasha Fierce of the animal kingdom, and nothing can stop his shine.

An administrator at the park, Sophie gave Bored Panda some information about the beloved Chico: “Chico is a wonderful little yellow-crowned Amazon parrot that gets on with both people and birds here at the sanctuary. He has resided here for a little over 18 months and without doubt, he’s one of the star attractions. Only being nine years old means he has many years of entertaining in front of him and who knows, Simon Cowell may have started X-Factor for animals by then!” [2]

Chico’s performance of Beyoncé’s 2008 hit song immediately went viral on Facebook with more than 100,000 views since late August. I’m pretty sure 10,000 of those are mine because I can’t get enough of the sweet guy.

Most parrots don’t actually know what they’re saying (or singing) and are only mimicking their owner’s words. They modify the air that flows out of their syrinx to make sounds. In Chico’s case, he’s always listening to songs being played at the park. He can cover other songs such as “Firework” by Katy Perry “Poker Face” by Lady Gaga, and “You Drive Me Crazy” by Gnarls Barkley. A bird’s got talent!

A regular visit at Chico’s home park, Graham Gardner, said, “People can’t get enough of him, there’s always a line of people waiting to see him—it’s like he’s an actual pop star at times… He’ll just break into song randomly and it leaves people in hysterics. He’s actually got a very good voice. Maybe Simon Cowell might get in touch, you never know.” 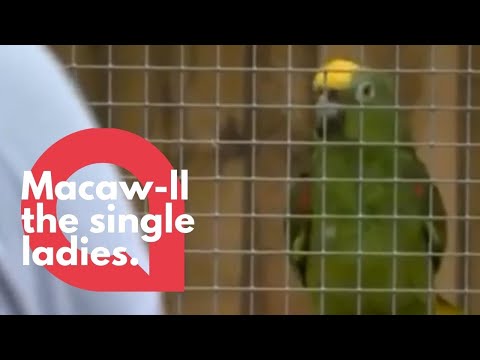 They may not always understand what they are saying or what is being said, but there’s never a dull moment when a singing parrot is around.

We still haven’t gotten over the hilarious Rocco, an African Grey Parrot that fell in love with Amazon’s Alexa in his owner’s home. [3] Rocco got kicked out of his former home for offending visitors with his relentless use of expletives. His new owner had a smart speaker and after Rocco began his illicit affair with Alexa, he began using her to order everything from ice cream and broccoli to light bulbs and kites.

Then there’s the global genius, Einstein from Texas, another African Grey parrot that shot to fame after winning a contest on the Animal Planet game show Pet Star. The sweet girl has almost 200 real words in her vocabulary and can mimic a wide range of different sounds including other animals, vehicles, and even a spaceship. [4]