Being a single parent has its challenges. There isn’t anything you wouldn’t do to see your kid(s) smile. Few of these parents receive praise or compliments for all their hard work and sacrifices. One father though recounted a lovely gesture from two total strangers that touched his heart and even made him cry.

We don’t know the identity of this single dad; he goes by the name Takopoke on Imgur. This awesome dad opted to skip dinner and a fling with another older woman; he took his 6-year-old daughter out for a lovely Valentine’s Day dinner instead. His little girl was his favorite date; the two spent their precious time laughing and chatting about their day. There is so much love in their home, and their bond is unbreakable.

Little did the father and daughter know, they had two witnesses to their special date. Two strangers at a nearby table were so inspired and taken with the two; they decided to leave them a note.

“Sorry to spy, but my husband and I saw you out with your little date and were so impressed with  what a great Dad you are…”

“From two adults who grew up without dads, it’s so important to have a male role model at a young age.

“Keep up the good work Dad!

The father was immediately brought to tears after reading their note. The message was unsigned, so he couldn’t personally thank them for their kind words and generous gesture. 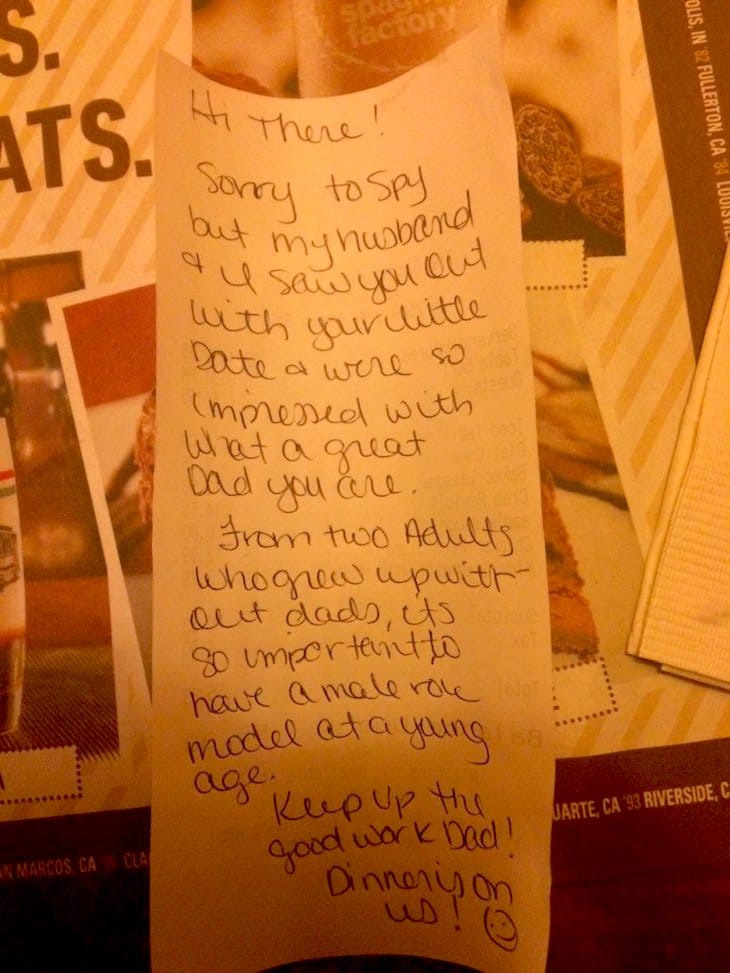 He was so moved by what they wrote; he posted a photo of the note online. He included this caption:

“As a single dad, I took my six-year-old daughter out to valentines dinner tonight when this happened. I won’t lie, I teared up at the table. So, thank you, random strangers. Thank you.”

This father might have received this note at a time when he needed it most. The couple’s act might have seemed small at the time, but it meant the world to him. Fathers and father figures are the real role models. They strive to establish close relationships with their children no matter their age.