Meet Zeus, The Rescued Blind Owl With Stunning Galaxies In His Eyes

Meet Zeus, The Rescued Blind Owl With Stunning Galaxies In His Eyes
Skip to content

Owls normally have a hard time functioning during the day, but imagine the fate of a tiny, defenseless small-sized owl that’s also blind. Later named Zeus, the Western Screech-Owl from California had been flying one night but his vision was so poor that he flew right into a wall and hit his head. Scared, injured, and unable to move, Zeus lay there until the owner of the porch found him in the morning.

He was taken to the vet and later to the Wildlife Learning Center in California where the caring staff could nurse him back to health. According to Paul Hahn, president and co-founder of the organization, the poor thing had only 10% of his vision and it was a true wonder how he’d survived out in the wild for so long. How he managed to get away from predators or hunt for food remains a mind-boggling question to his adopters.

“He was found emaciated and blind in front of someone’s house in Central California,” Hahn said. “A veterinary ophthalmologist thoroughly examined him, brought him back to health, and deemed him non-releasable because he only has about 10% of his vision and would not be able to survive in the wild on his own.”

As he recovered, Zeus became accustomed to his new environment and the very kind staff that nursed him back to health. One of the many special things about the little owl was the stunning color of his eyes. Without lights, Zeus’s eyes appeared black with white spots in them, glimmering like an ocean under the moonlight. However, when lights are shone upon his pupils, they take on a stunning dark blue color with such depths that they remind people of the endless nature of galaxies. The staff at WLC were so mesmerized by his eyes that they eventually to name him Zeus, after the Greek of Thunder. The name seemed befitting of a truly regal creature with such stunning eyes. 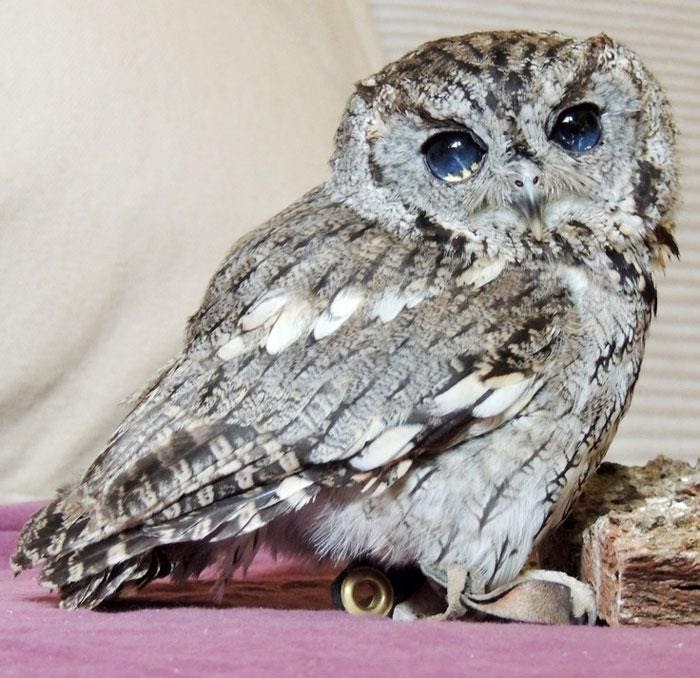 Of course, the WLC tried to figure out if something can be done for the little bird’s vision. They examined his eyes and discovered that his blindness is caused by a clot of protein and blood pigments, which are responsible for the white spots in them. Also, the poor thing has a type of cataract that further complicates his condition.

In Hahn’s words: “His general condition is a capsular cataract, the white flecks that glisten in his eyes are caused by unique fibrin/blood pigment clots. These pigments cause a unique starry-eyed look, for which he is well known, hence the name Zeus.”

Thankfully, things are better for the sweet bird now as he has found a loving home with the WLC staff. He has also become a personal favorite of the founder, Hahn, who has Zeus hanging out in his office at nearly every hour of the day.

“Zeus exudes a very peaceful presence and is very calm. He has a very big personality and exhibits a bit of a curious nature,” Hahn said.

Zeus is also a favorite of the guests who visit the center as people just can’t get enough of his gorgeously beautiful eyes and sweet personality. If you’re ever in the Sylmar Neighborhood in Los Angeles, California, be sure to drop by and see the amazingly adorable Zeus for yourself. He’d certainly brighten your mood any day!