Even if a child is seated in her mother’s lap, she might not be safe from kidnappers. Video footage from California shows the moment when a brazen predator tries to seize a six-year-old girl from the lap of her mother. The suspect, who is reported to be homeless, nearly grabs the girl from the mother as she dines at a pizza restaurant with the rest of her family – it is a move so bold and unexpected the homeless suspect nearly got away with it.

Fortunately, the father of the child, Riley Pegram, and his wife, Noheili, were able to save their daughter, Neveah, from the grips of the abductor. Neveah was enjoying dinner with her family, including her brother Chris, when the suspect rushed over to the Venice Beach restaurant on January 4, 2020, and tried to grab Neveah from her mother’s lap at around 7 pm.

Police report that this was the family’s first trip to Venice Beach. While the location has been considered rough in recent years, the suspect, Evan McLaurin-Nelson, 31, was very bold in his intentions. He approached the group and knew – in that very instant – that he had to “save her” from her family. Clearly, McLaurin-Nelson was deranged to have believed such a bizarre intuition.

The family first came into contact with McLaurin-Nelson on the street. So they moved to a pizza restaurant away from him so a confrontation would not escalate. But they were unable to save Neveah from the man who wanted to “save her” from the family that loved her more than anything in the world.

When the homeless suspect entered the restaurant, he tried to seize the child from behind. However, Chris, a veteran of the United States Army, pushed the homeless man back. He also wrapped his arm around McLaurin-Nelson’s neck to subdue him. But the suspect was not done. He came for Neveah again, undeterred by her father’s resistance. He was a holy mission to save the girl from the family she loved.

During the second attempt, mother Noheli uses her leg to push away the abductor. Riley then tried to reach out and protect his sister from the man trying to seize her. At this point, Chris rushes over and grabs McLaurin-Nelson by his hair. He drags him back and to the floor before putting his Army training to good use by pinning the man to the floor.

“He wrestled with the suspect for several minutes until LAPD Pacific Division officers responded and took the suspect into custody,” a police statement said. 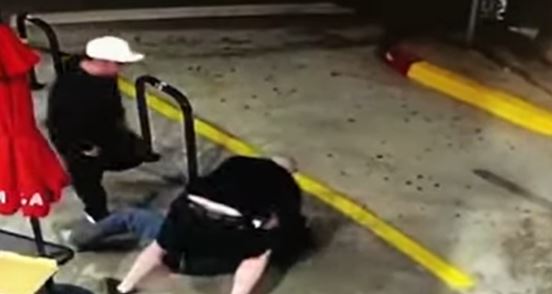 Riley recently wed Noheli last year. He wanted to protect the little girl, who was the man’s target.

“The whole time, he was just yelling out loud, ‘Save the girl. I need to save her.’ We think he was on something. On some type of drugs or something. I don’t know if he was homeless, but I know he was on drugs.”

During an interview with the press, Neveah said: “It was so scary. I was bawling my eyes out because I was scared I was going to get taken away from my mommy and daddy.”