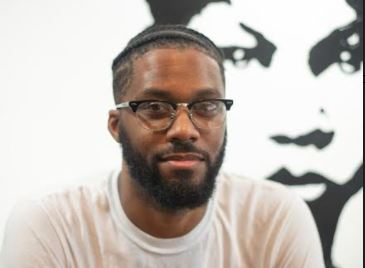 Jonathan Harris is a visual artist born and raised in the city of Detroit. After attending The Detroit School for the Fine and Performing Arts, he attended Henry Ford Community College and Oakland University. There he majored in graphic design and minored in studio art. Although Harris is experienced in digital arts and advertising, fine arts is where his heart lies. Acrylic paint, oil paint, pen and charcoal, are among his mediums of choice when creating.

Harris’ work is emotive and mostly focuses on current events and the African American experience. Bringing awareness to social and world issues, in addition to instilling pride into the Black community, are goals that he strives to accomplish through his art and curating work. He has publicly presented work during special programs at the Detroit Institute of Arts, local gallery exhibits, the Canvas Pontiac showcase, for the city of Detroit, and at Beacon Park during the “Bonded” exhibit, which he curated along with other artists.

Harris shared his “why” with rolling out.

I became interested in art at a very young age. I would draw during church or class. At Burton elementary I was part of the Gifted and Talented Art Club and participated in other art programs as well. Drawing was a passion for me, it was a big part of my life, even as a kid.

Read more after the jump.