Forget your standard spider webs and assorted ghost cutouts for Halloween decorations — here’s an idea that’s totally next level. Halloween is always a fun holiday to decorate for because you can take things cute or get really dark and spooky with your theme, but this fun decorating tip uses an existing part of your house that adds to the charm. It’s so clever, you’ll wonder why you never thought of it.

If you’re looking for some decorating inspiration, look no further than this woman’s brilliant idea involving a garage door. The best part? It was pretty easy to implement and didn’t need much more than a bit of creativity. 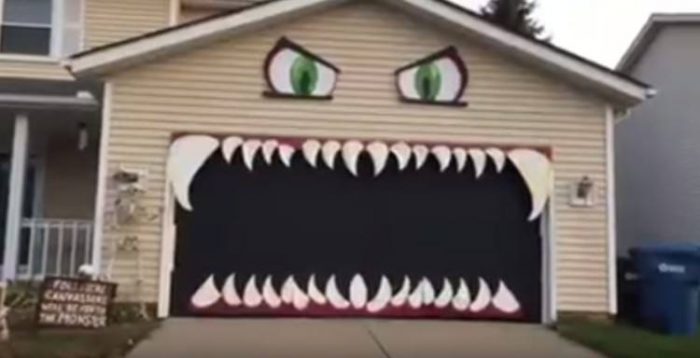 This cool idea comes from a professional face painter in Ohio who transformed her garage door into a monster. Amanda Destro Pierson painted the monster’s jaws in the most ingenious way — so that when the garage door opens, the mouth closes!

She added some spooky eyes to her fang-toothed garage creation and took a video of it, posting it to Facebook where it quickly went viral and no doubt inspired others to try something similar next Halloween.

Amanda found the idea on Pinterest and decided to put in about 10 hours of work recreating the idea on her Parma, Ohio home with some buckets of paint. Amanda sketched and cut out the design in a few hours and spent five hours hand painting craft foam and using duct tape to hold the mouth in place. She used siding hooks and fishing line for the eyes. 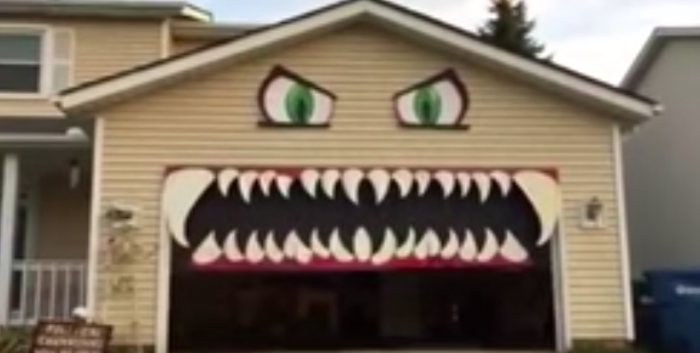 She told the Today show that she was surprised that her creation got so much attention, noting: “It’s ridiculous. I’ve been laughing a lot about it. I’ve always wanted a house so that I could decorate it for Halloween, which I love doing more than for Christmas.”

Halloween is near and dear to her heart as a favorite holiday, and she, her husband, Andrew, and 13-year-old stepdaughter typically get dressed in elaborate costumes every Halloween.

She noted: “People have been honking their horns and waving when they see it. I would say it’s just about all been positive.”

Amanda’s even created a kit to sell so that other people can deck their garages out like a monster too. 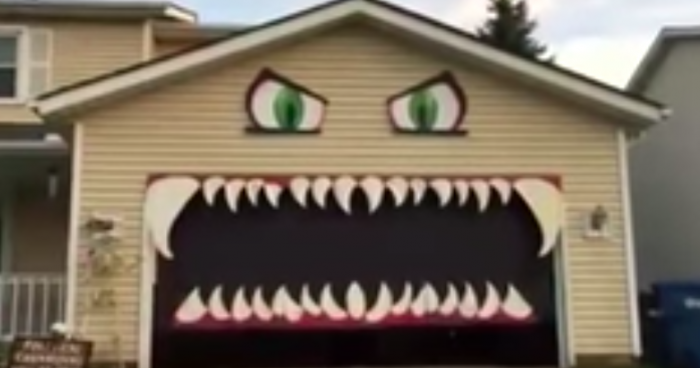 Amanda wrote on Facebook at the time: “OH MY GOD YOU GUYS!!! I can’t believe MILLIONS OF PEOPLE have watched my garage door go up and down! LOL! I can’t even keep up with the number! I’m so glad you all like my monster house! I am seriously blown away by love here.”

People who saw the video definitely wanted to copy the idea on their garage doors, with many commenting that they planned to give the idea a try for their next Halloween display. Others wondered if they could create a Christmas themed garage door monster, with ideas of the Grinch and the Abominable Snowman suggested.

Still others wondered how you could make this kind of display weather-proof so that it could be used over multiple Halloween seasons.