WASHINGTON (AP) — President Donald Trump‘s sprawling political operation has raised well over $1 billion since he took the White House in 2017 — and set a lot of it on fire.

Trump bought a $10 million Super Bowl ad when he didn’t yet have a challenger. He tapped his political organization to cover exorbitant legal fees related to his impeachment. Aides made flashy displays of their newfound wealth — including a fleet of luxury vehicles purchased by Brad Parscale, his former campaign manager. 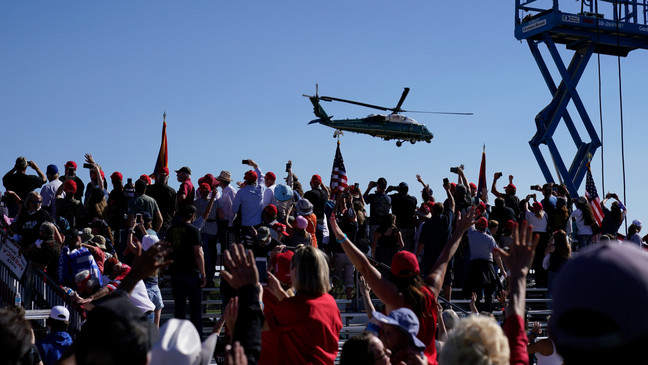 Now, just two weeks out from the election, some campaign aides privately acknowledge they are facing difficult spending decisions at a time when Democratic nominee Joe Biden has flooded the airwaves with advertising. That has put Trump in the position of needing to do more of his signature rallies as a substitute during the coronavirus pandemic while relying on an unproven theory that he can turn out supporters who are infrequent voters at historic levels.

“They spent their money on unnecessary overhead, lifestyles-of-the-rich-and-famous activity by the campaign staff and vanity ads,” said Mike Murphy, a veteran Republican consultant who advised John McCain and Jeb Bush and is an outspoken Trump critic. “You could literally have 10 monkeys with flamethrowers go after the money, and they wouldn’t have burned through it as stupidly.”

For Trump, it’s a familiar, if not welcome, position. In 2016, he was vastly outraised by Democratic nominee Hillary Clinton but still pulled off a come-from-behind win. This time around, though, he was betting on a massive cash advantage to negatively define Biden and to defend his own record.

Trump campaign manager Bill Stepien insisted money was no issue. “We have more than sufficient air cover, almost three times as much as 2016,” he told reporters Monday.

Biden, Stepien added, was “putting it all on TV,” as he eschewed most door-knocking because of the pandemic, while Trump has roughly 2,000 field staffers across the country knocking on doors and making calls for his campaign. 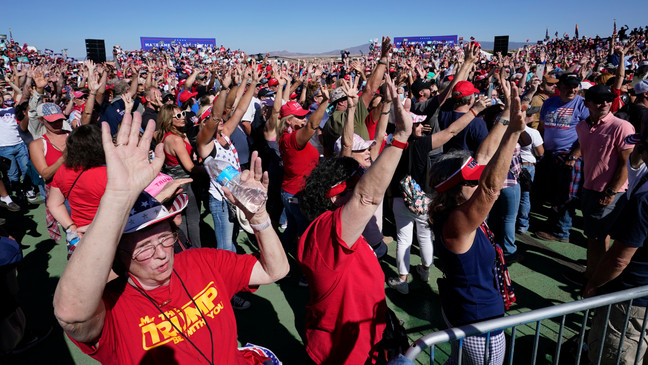 “Where we have states that are sort of tipping, could go either way,” Trump told campaign staffers Monday, “I have an ability to go to those states and rally. Biden has no ability. I go to a rally, we have 25,000 people. He goes to a rally, and he has four people.”

While a half-dozen pro-Trump outside groups are coming to the president’s aid, Biden and his Democratic allies are on pace to dump $142 million into ads in the closing days of the campaign, outspending Republicans by more than 2-to-1, according to data from the ad tracking firm CMAG/Kantar.

On Monday, the firm Medium Buying reported Trump was canceling ad buys in Wisconsin; Minnesota, which Trump had hoped to flip; and Ohio, which went for Trump in 2016 but now appears to be a tight contest.

It’s a reversal from May, when Biden’s campaign was strapped for cash and Parscale ominously compared the Trump campaign to a “Death Star” that was about to “start pressing FIRE for the first time.”

The ad campaign they unrolled over the next three months cost over $176 million but did little to dent Biden’s lead in public opinion polling.

Trump is now in a position that’s virtually unthinkable for an incumbent president, said Travis Ridout, co-director of the Wesleyan Media Project, which tracks advertising spending.

“Advertising obviously isn’t everything. But we do think ads matter for a couple percentage points in a presidential race. And it’s just not a good sign for the Trump campaign,” Ridout said.

A review of expenditures by Trump’s campaign, as well as the Republican National Committee, lays bare some of the profligate spending.

Since 2017, more than $39 million has been paid to firms controlled by Parscale, who was ousted as campaign manager over the summer. An additional $319.4 million was paid to American Made Media Consultants, a Delaware limited liability company, whose owners are not publicly disclosed.

Campaigns typically reveal in mandatory disclosures who their primary vendors are. But by routing money to Parscale’s firms, as well as American Made Media Consultants, Trump satisfied the basic disclosure requirements without detailing the ultimate recipients.

Other questionable expenditures by Trump and the RNC that are included in campaign finance disclosures:

There are signs Trump’s grassroots fundraising operation has slowed, too. Once a driving force, the campaign is now spending about 77 cents for every dollar it raises, typically through online ads asking supporters to chip in a few dollars.

Between July and September, it cost the campaign $181 million to raise $235 million through such small contributions. That’s a considerable break from earlier in the year, when it raked in hundreds of millions while spending far less.

Some of Trump’s wealthy supporters are also exploring their options.

One of the reasons the group was founded in August is because there is deep distrust among some GOP donors that the existing pro-Trump organizations would spend the money wisely, according to a Republican strategist with direct knowledge of the matter. The strategist spoke on condition of anonymity to discuss sensitive discussions with donors.

Dan Eberhart, who has given over $190,000 to Trump’s election efforts, said many Republican donors are now focused on keeping control of the Senate in GOP hands — not Trump’s chances of winning.

“The Senate majority is the most important objective right now,” he said. “It’s the bulwark against so much bad policy that the Democrats want to do.”