Business groups, investors, church leaders and farmers are urging the federal government to go further than net zero by 2050 and increase its 2030 commitment for cutting greenhouse emissions after Nationals leader Barnaby Joyce all but ruled out an upgrade to Australia’s current position.

The federal government is under international pressure to move with its allies and commit to more ambitious climate action ahead of the United Nations climate summit in Glasgow next month. 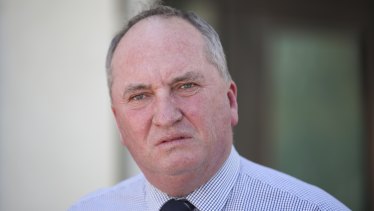 Prime Minister Scott Morrison is seeking support from the Nationals so he can commit to achieving net zero emissions by 2050, but has not indicated if he would upgrade the current 2030 target to reduce emissions by at least 26 per cent by 2030, based on 2005 levels.

Mr Joyce was asked on Saturday if his party would support a 2030 upgrade ahead of a crucial party room meeting where Energy and Emission Reductions Minister Angus Taylor presented the government’s plan to meet the 2050 deadline.

“You can’t recklessly sign up to something without seeing details. The only details that are being presented to the National Party are for net zero by 2050,” Mr Littleproud said.

Climate scientists say deep emissions cuts by 2030 are needed to achieve the goal of the Paris Agreement to limit global warming to less than 2 degrees, and as close to 1.5 degrees as possible and avoid the worst damage from climate change. Waiting longer to reduce greenhouse gases will allow too much carbon to build up in the atmosphere and cause the atmosphere to continue heating long after 2050, even if net zero is achieved by then.

Faith leaders representing major denominations on the National Council of Churches wrote to Mr Morrison on Friday calling on him to go beyond a 2050 target and commit to a 2030 target to cut emissions by at least 50 per cent, and up to 74 per cent, which is consistent with global action required to achieve the Paris goal.

“It is critical that we act now. For the love of God, for the love of creation, and for the love of our neighbours, we must take steps that will limit impacts of climate change, so that all who make their home on earth can flourish,” said the Reverend Sharon Hollis of the Uniting Church in Australia.

Charlie Prell, chairman of Farmers for Climate Action, one of the largest primary producer representative groups in the country, said a net zero 2050 target was a “big step that I don’t want to diminish the importance of,” but he said the Nationals were “kicking the can down the road” by rejecting 2030.

“I don’t understand how they are saying ‘show me the plan’ when they are in government.”

A report released on Monday by the Asian Investor Group on Climate Change, Ceres and the Investor Group on Climate Change, which represent investors with a cumulative US$46 trillion in assets, called for G20 leaders, including Australia, to set ambitious 2030 targets. It said Australia is among the least attractive countries for green investment, alongside Argentina, India, Indonesia, Mexico, Russia and Saudi Arabia.

Investor Group of Climate Change Erwin Jackson said global investors, which Australia relies on for foreign investment, will flow away from countries without ambitious 2030 targets.

“Institutional investors with a lot of cash are making judgments on investment attractiveness based on macro policy,” Mr Jackson said.

“Investors want to plug numbers into spreadsheets to determine climate risks in their investments, but you can’t do that without a target.”

The Business Council of Australia, which represents major banks, big miners, and other large corporations, last week called on Australia to boost its 2030 emissions reduction target to at least 46 per cent and up to 50 per cent below 2005 levels.

The federal government is set to update its climate policy before the Prime Minister heads to Glasgow. It could announce a binding upgrade to its 2030 target, or it may release projections that forecast Australia will achieve deeper emissions.

Analysts say state renewable energy drives will replace a lot of coal power and are expected to drive enough carbon cuts to enable a 35 per cent 2030 target. But it remains to be seen if the Coalition would endorse locking in a commitment.

Most wealthy nations have already committed to net zero by 2050 and have announced deeper cuts for 2030. Other nations’ goals start from different baselines, but all are viewed as more challenging than Australia’s commitment. The US has committed to a target of 50 to 52 per cent by 2030. Japan is targeting 46 per cent, South Korea 40 per cent and the UK 68 per cent.

Most Viewed in Politics