Residents of Plano, Texas, paid tribute to Sarmistha Sen by placing pairs of running shoes near where she was killed.

(CNN)A 43-year-old scientist and mother of two was found dead near a creek in Plano, Texas, on Saturday morning after going out for her regular morning run, police said.

Sarmistha Sen had gotten up early for a run and at some point in time came across her attacker, according to Plano Police Department public information officer David Tilley.

Less than two hours later, a witness saw what she believed was a body about 20 to 25 feet below near the creek. Police were called to the scene and discovered Sen’s body.

Her death is being classified as a homicide and the investigation is ongoing. A person of interest is currently being held at the Collin County Detention Center for a burglary that happened nearby, according to a press release from Plano Police Department.

Sen was an avid runner and liked to wake early and jog around Plano’s Chisholm Trail every morning, according to a CaringBridge site set up by her family, her husband, Roy Arindam, confirmed to CNN. The site said that she was “brutally killed by a stranger for no apparent reason.” 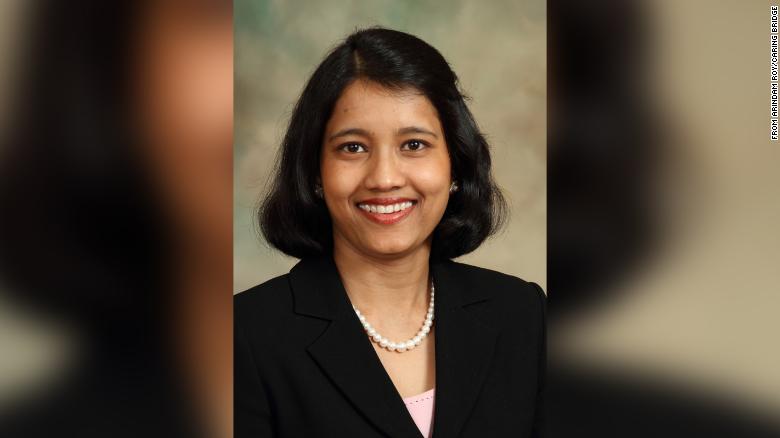 Sarmistha Sen, 43, was killed after going out for a morning run on August 1 in Plano, Texas.
The killing is an extreme example of an issue women commonly face while out running. A 2016 survey from Runner’s World found that 43% of women at least sometimes experience harassment on the run compared with just 4 percent of men.
Local residents paid tribute to Sen by dropping off pairs of running shoes near the site where she was killed.

A startling number of women say they have been harassed while running
Sen was born in Sindri, India, later moved to Bangalore and then got married and moved to Plano in 2004, the CaringBridge site said. She studied at UT Dallas and University of Alabama Birmingham and worked on cancer research for most of her career, the site said.

She leaves behind her husband and two children, ages 12 and 6.

“Sarmistha lived a free and fearless life inspiring many with her infectious energy and carefree smile,” the family wrote on CaringBridge. “Sarmistha was an avid runner, gardener and a great cook. She practiced healthy mindful living and she could cook extremely healthy food that tasted amazingly good.

“She was a trained singer of Indian classical music and loved to teach and perform music. She was passionate about cancer care and was a lifelong supporter of cancer research.”